“This congregation should run more like a business.” How can anybody doubt that? Businesses are among our most-prized cultural creations; successful business leaders are our richest citizens. When a governing board member holds up “business” as a model for the church or synagogue, the point can seem self-evident.

Except that others grumble that the congregation “feels too much like a business” and this, too, seems an obviously valid criticism. The mission of a congregation is to transform lives, not to make money. A congregation that becomes too bureaucratic and acquisitive threatens to squeeze God’s living, moving spirit out. 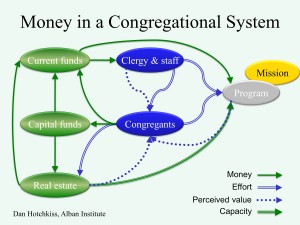 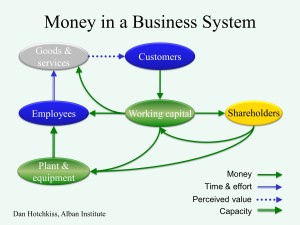 So which is it? Should a business and a congregation be alike or different? The two diagrams accompanying this article portray the flow of money and related quantities in what turn out to be two very different kinds of systems.

In a business, shareholders are the alpha and omega, money-wise. They contribute the initial capital to start a business, including cash (“working capital”), real estate (“plant”), and machines (“equipment”) that together provide the space and tools (“capacity”) for the firm to produce goods and services.

Customers replenish the supply of working capital by buying what the firm produces. Why? Because they perceive value in it—right or wrong. Customers refill the fund of working capital, enabling the company to maintain plant and equipment, pay employees, and buy raw materials, services and other inputs that it needs in order to keep cranking out the widgets.

Many companies fail because they get mixed up about the role of perceived value. It is not enough to build a better mousetrap; you need customers who think your mousetrap is worth more than you’re asking for it. Perceived value, not the real McCoy, is what makes people into customers.

If we liked, we could complicate this picture. We could add banks and other lenders (which often provide as much or more of the initial capital than shareholders do, and expect to be compensated for their contribution). We could separate some special kinds of contributions employees make, for instance, marketing, which may contribute as much or more to the perceived value of the goods and services than the production workers do. But for our purposes, this picture will suffice.

The second diagram shows that the role of money in a congregation is a bit more complicated. While for business everything begins and ends with stockholders, the congregation diagram converges at two points: the congregation and the program. In “program” I include all that a congregation does, including worship, education, social ministry, and giving money to the needy, other charities, and denominational bodies. Lurking at the side, partially obscured by all of the activity (“program”) is the congregation’s mission.

The fulfillment of the mission is not measured in dollars. Instead, we evaluate the mission by evaluating program—and so program stands as proxy for the mission, but the two are not the same. A common error in evaluation is to measure indicators of program activity like attendance without relating the activity to the desired result. High attendance in youth ministry is a positive—but only if the young people’s lives are changed in good ways! The congregation’s mission is the yardstick for measuring program effectiveness.

The other center of money-related activity is the congregation itself. Congregants, alive and dead, are the ultimate source of most of the money. They give in two main ways: to current funds, which pay salaries and program costs; and capital funds, including funds for acquiring property and endowment funds invested to produce a flow of income. The other major inputs into the program are the time and effort of the staff and members of the congregation.

Like customers in business, the congregants will continue to provide money and effort if they perceive value. It is not enough to fulfill the mission or provide a high-quality program—the value has to be visible to those who pay the bills. Most congregants perceive value through their appreciation of the program, of the clergy and staff, and of the building. Only a few see past these concrete symbols to perceive the value of the mission itself—a good goal of leadership is to increase that group.

Clergy and staff also choose how much time and effort they will allocate to developing program as opposed to redeveloping the congregation. Too much focus on the congregation and the mission suffers; too little and the goose that lays the golden egg will starve.

At the very least, a conversation using these two diagrams around the governing board table may help members to see that money is just as important in a congregation as in business, but that it plays a different—and more complicated role. Looking ahead to the next several years, a board might ask itself, “In what ways do we want to change our congregation’s flows of money, effort, and perceived value?”

Dan Hotchkiss, a long-time senior consultant for the Alban Institute, now works independently with congregations and other mission-driven groups from his home near Boston. Dan's best-selling Alban book Governance and Ministry: Rethinking Board Leadership, now in an expanded and revised second edition, has helped hundreds of churches, synagogues, and non-profit organizations to streamline their structure and become more mission-focused and effective.